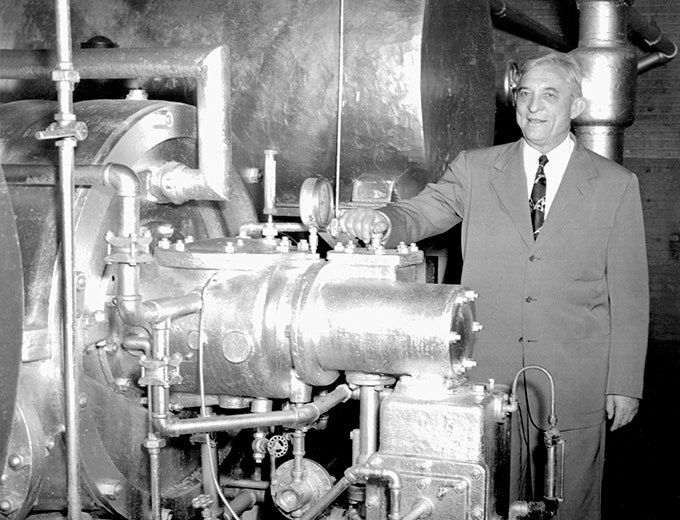 Nowadays, an air conditioner is a must and very rarely you will see a home without it. At LA Construction Heating and Air, air conditioning service is one of our specialties. HVAC systems are a luxury we know you love especially during the hot days of summer. To learn more about the systems that keep us comfortable in our homes we have gathered some air conditioner fun facts below.

Dr. John Gorrie is considered the father of refrigeration and air conditioning. As a doctor in Florida in 1842, he developed a machine that made ice to cool the air for his patients. He was granted a patent to create similar machines for homes, but he died before he could create it.

In 1902 Willis Carrier invented the very first air conditioner not for comfort, but to control humidity. He designed it to help the Sackett-Wilhelms Lithographing and Publishing Company in New York fix their printing problems. High heat and humidity was causing the paper to change size and causing issues with the inking process.He designed the air conditioner to keep the paper from expanding and so that the ink would dry quickly. His invention was able to provide a cool indoor space and maintain a consistent indoor humidity level. He later formed the Carrier Engineering Corporation, which employs about 53,000 people and worth over $18 billion today.

It was not till 1906 that the term air conditioning was coined by North Carolina textile manufacturer Stuart Cramer. He started using the term after air cooling technology vastly improved the quality of fabric produced in the plant. A much catchier term than An Apparatus for Treating the Air which was used on the patent of one of the first modern cooling systems.

AC In The White House

The United States Oval Office installed the first air conditioning system is 1929, right after the stock market crash at the beginning of the Great Depression. The air conditioner cost the US government $30,000 and was first used by president Herbert Hoover.

In the 1930s before air conditioning units became affordable for residential homes, people experienced cooled air for the first time in movie theaters. To escape summer heat people would go to the movies. As a matter of fact “Refrigerated Air” was highlighted in theater advertisements. As a result, production companies would save the best films for summer, making the term “Summer Blockbuster” popular a term still used today.

Today every car has an air conditioner. The Packard Motor Company was the first car company to offer air conditioning in their cars in 1939. It was not extremely popular due to its high cost and design. In order to turn on the air conditioning, the driver had to stop the car, open the hood and disconnect a compressor belt. The evaporator and blower system also took up about half of the trunk space. It was not the most user-friendly design, but it worked.

The Growth of the South

Up until the 1960s the nation’s booming economies were in the Northeast. After air conditioning became popular, it created a population growth in some parts of the United States like Arizona, Nevada,Florida and Texas. Air conditioning made it possible for northerners to move south as the hot summers were now more tolerable.

Air conditioning does not just improve comfort and productivity, it also saves lives. American researchers discovered that heat- related deaths decreased around 80% since the 1960s when residential air conditioning became widely used. Furthermore, ac spurred science by helping further scientific medical research. As a result of a cool, controllable, less humid environment provided by air conditioning doctors have been able to create medications and cure various diseases. Air conditioning in hospitals has made it possible to decrease bacteria and help prevent the spread of disease.

Before air conditioners people would keep things cool by using blocks of ice. The first AC systems introduced were measured in “Ice Power” or by how many blocks of ice it would take to produce the same cooling power.

Architecture Was The Original AC

Before air conditioners, architects would design homes and buildings with high ceilings, breezeways, and landscape that provided shade to keep occupants cool. When air conditioners became popular, architects changed their designs to no longer offer cooling effects, which makes it harder to stay cool if your ac breaks down.

The most basic form of air conditioning uses evaporative cooling. Electric fans were used before modern air conditioning systems. Fans do not actually cool the air, but they produce a wind chill effect by evaporating the sweat from your skin and thus decreasing your temperature. In Ancient Egypt, water-soaked reeds were hung on windowsills.As the wind blew, the water would evaporate off the leaves cooling the air. In Ancient Rome, water was circulated through the walls of homes to keep them cool. Furthermore, in 180 AD a Chinese artisan invented a 10 foot fan with wheels that would cool an entire hall just by turning a crank.

The first window air conditioner designed to cool an individual room in a home was invented in 1931 by H.H. Schultz and J.Q.Sherman. It sat on the windowsill and yet was an expensive cost. In the 1940s if you wanted to purchase one it would have been $350 or $3,500 in today. They became a status symbol after World War II, and 1 million window units were sold in 1953.

The first fully air-conditioned home was built in Minneapolis in 1913 by Charles Gates, heir to the barbed wire fortune. Unfortunately, he died before the home was completed and he never was able to enjoy the home.

Most Homes Did Not Have AC Until The 1970s

Human Tolerance For Heat Has Decreased

We are programmed to need AC. Scientific studies show that since the invention of air conditioning, the natural human tolerance for heat has decreased. We have become accustomed to a cool, air-conditioned environment. Contact LA Construction Heating and Air, if your air conditioner is giving you any trouble. You may contact us online or give us a call at 818-341-3406. We have technicians available to expertly manage your ac repair, ac maintenance, or ac replacement.

Your submission has been received!
Something went wrong while submitting the form.

What Sets Us Apart

New In Our Blog

There are several reasons why your air conditioner keeps tripping the circuit breaker. The ac circuit breaker is a safety switch that protects your equipment from damage or fire by shutting it off when an overload is detected. The main reason why your ac is drawing in more amps is because something is causing it to overwork and operate inefficiently. So, if you have a tripped breaker when running AC, it is not a situation you want to ignore.

One of the best ways to reduce your electric bills is through the installation of a new high-efficiency AC. There are a few key features to look for when buying a new AC that will help keep your energy bills low.